The Norwegian Royal Yacht Norge is one of the world’s two remaining royal yachts. The other is the Danish Royal Yacht Dannebrog, since the British Royal Yacht Britannia was decommissioned in 1997.

In 1905 the Norwegian Government formally invited Prince Carl of Denmark to become the king of Norway. The proposal included the promise of a royal yacht, financed by the state and placed at the king’s disposal. However, due to the difficult economic situation in Norway after the dissolution of the union with Sweden, King Haakon (formerly Prince Carl) did not call upon the Government to provide a yacht.

Gift from the people

Not until after WWII did the question of a royal yacht arise again. The Norwegian press appealed to the people to raise the funds necessary to present King Haakon with a yacht on the occasion of his 75th birthday. In July 1947, the British motor yacht Philante was purchased for NOK 1.5 million.

The Philante was built in England in 1937 for the British aircraft manufacturer Thomas Sopwith. At the time it was one of the largest vessels of its kind. Sopwith used the yacht as a base when competing in regattas. In fact, the Philante first entered Norwegian waters in 1938 in connection with a regatta at Hankø in Eastern Norway.

After the outbreak of WWII the British Royal Navy requisitioned the Philante. First used as an escort vessel for convoys crossing the Atlantic, it was put into service as a school ship for training convoy escorts in 1942. The ship was returned to Thomas Sopwith in 1946 and sold to Norway the following year.

Renovation of the ship

The ship needed to be refurbished before it could be used, so King Haakon was given a model of the yacht on his 75th birthday. In particular, the interior of the ship required extensive refitting, and architect Finn Nilsson was asked to be the designer. On 17 May 1948 the ship’s captain, Commander Christian Monsen, raised the command pennant for the first time, and on 9 June the Royal Yacht was handed over to King Haakon.

The ship was christened the Norge. 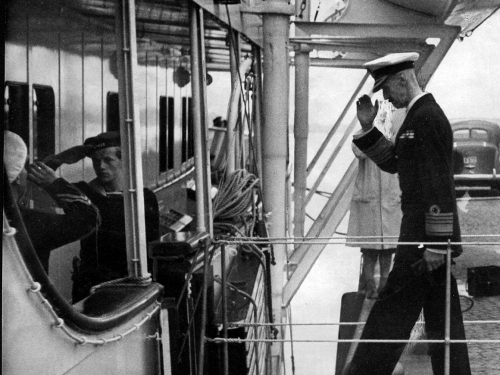 In the years that followed, King Haakon used the Royal Yacht to visit communities along the coast of Norway and to travel abroad. In June 1955 the King paid a visit to Molde in Western Norway. It was to be his final voyage on the Norge.

King Olav took over the ship after his father died in 1957. A technical assessment resulted in a 10-year plan for upgrading the hull and technical equipment. Like his father before him, King Olav used the Royal Yacht in his official capacity as well as in his leisure time.

In the winter of 1985 the Norge was in dry dock at the Horten Shipyard for repair and upgrading when welding operations sparked a fire that quickly spread. The vessel was severely damaged in the fire, with the exception of the hull and engines, which remained relatively intact. King Olav decided that the ship was to be rebuilt. 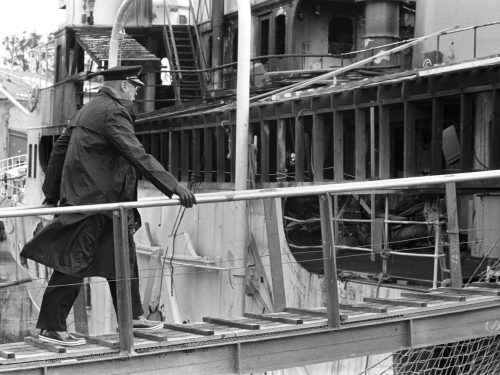 King Olav inspecting the ship after the fire in 1985. Photo: Hans Due, Scanpix

Once again, architect Finn Nilsson was asked to refit the interior. Just over a year after the fire the King was again able to take command of the Royal Yacht, in safer and in better technical condition than had previously been the case.

HM King Harald took over the Norge after King Olav died in 1991. The King and Queen travel on board the Norge in connection with official engagements in Norway and abroad. The King also uses the vessel as a base when competing in major yacht races.