In focus: HIV and AIDS

In her role as Special Representative for UNAIDS (Joint United Nations Programme on HIV/AIDS) Her Royal Highness The Crown Princess has worked for many years to strengthen youth leadership in the AIDS effort.

Children and young people are the segments of the population most vulnerable to the AIDS epidemic. For this reason Crown Princess Mette-Marit’s primary focus has been on securing youth leadership in the effort to prevent the spread of HIV/AIDS and to combat prejudice. The Crown Princess has participated actively in efforts to ensure that those who are most severely affected by the epidemic – young people and people with HIV – are able to influence decision-making and strategy processes in AIDS-related activities.

Crown Princess Mette-Marit was appointed Special Representative for UNAIDS (Joint United Nations Programme on HIV/AIDS) in 2006. In this capacity she has travelled to Tanzania, Nicaragua, Ukraine and Mali on AIDS-related visits. 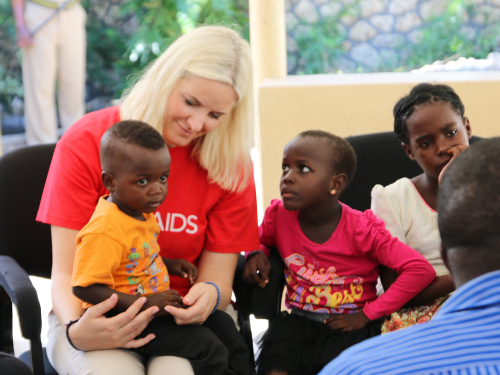 In Tanzania in 2016, the Crown Princess saw first-hand how effective medications have stopped the transmission of HIV from mother to child. Photo: Christian Laagard, The Royal Court

She has also led delegations to the International AIDS Conference, the world’s largest health conference, which is held every two years, and involves the participation of some 20 000 delegates from all over the world. The Crown Princess participated for the first time in 2006, when the conference was held in Toronto, and has subsequently attended the conferences in Vienna and Washington, D.C.

The Crown Princess has an extensive international network in the HIV/AIDS sphere, and has assisted UNAIDS in its strategic activities to involve local youth organisations around the world in combatting the spread of the epidemic.

In June 2011 the Crown Princess attended the UN General Assembly High-Level Meeting on AIDS, together with the then Minister of the Environment and International Development Erik Solheim. In summer 2014 she was invited to hold the keynote address at the UN General Assembly on human rights and HIV in the post-2015 agenda – as part of the work to draw up the new Sustainable Development Goals. 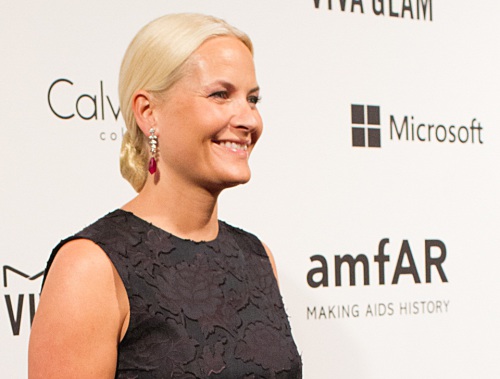 In June 2014, the Crown Princess received the prestigious amfAR Award of Inspiration for her many years of work to prevent AIDS. The award was presented by the American Foundation for Aids Research. Photo: Kevin Tachman.

In June 2009 the Crown Princess invited 30 young leaders from all over the world to Oslo to work on specific recommendations for future AIDS efforts. Established leaders from various sectors also participated at the summit as mentors and discussion partners.

Crown Princess Mette-Marit hosted the three-day summit together with then Norwegian Minister of the Environment and International Development Erik Solheim and UNAIDS.

In 2003 the Crown Princess completed a course of study at the School of Oriental and African Studies (SOAS) in London in which HIV/AIDS and Development was one of four courses undertaken. After completing her studies in England she spent three months as an observer at the Norwegian Agency for Development Cooperation (Norad) where she focused on HIV and AIDS-related issues.

Crown Princess Mette-Marit herself describes her meetings with mothers and children affected by HIV and AIDS in Malawi in 2005 as a personal turning point. After the visit she felt a strong obligation to continue to work in the area of HIV/AIDS.

The Crown Princess with seven-month old Deborah in Malawi. The child’s mother has HIV, while the father is HIV free. Photo: Knut Falch, Scanpix.

For several years the Crown Princess has also been involved as a volunteer at Aksept, the Church City Mission’s centre for people affected by HIV/AIDS. She has participated in various activities at the centre and has been actively involved in the annual celebration of World AIDS Day on 1 December.