Flags at the Royal Palace

Four different flags are flown over the Palace:

The National Flag is the Norwegian flag. The State Flag resembles the National Flag but is swallow-tailed and has a third tail (the “tongue”) between the two other tails.

The Royal Standard of Norway

The Royal Standard is flown whenever the King is in Norway or Norwegian territories.

The Standard of the Crown Prince 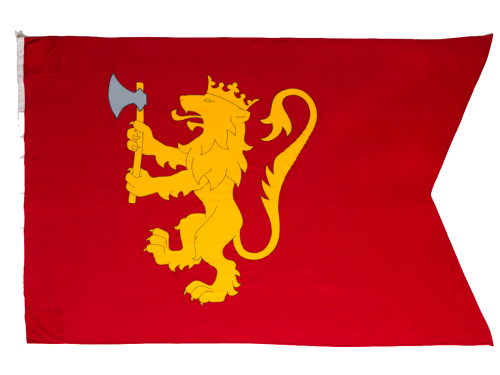 If both the King and the Crown Prince are out of the country, the State Flag is flown above the Palace. The flag is changed as the Prince Regent leaves the country.

Both the Royal Standard of Norway and the Standard of the Crown Prince are found in three different sizes:

Flying flags from the Palace balcony

Sometimes flags are flown from the balcony of the Royal Palace as well as – or instead of – from the roof. This is the case, for example, if it is an official flag day and the King is at Stiftsgården or on the Royal Yacht (in Norwegian waters). On such occasions the flag pole on the roof remains empty and the State Flag is flown from the Palace balcony.

Flags are flown from the balcony according to instructions issued by His Majesty The King.