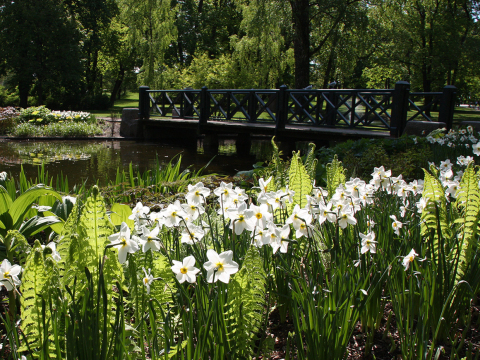 The Palace Park, one of the Norwegian capital’s first and largest parks, surrounds the Royal Palace on all sides and features grassy areas as well as old, majestic trees. The Palace Park was developed simultaneously with the construction of the new Royal Palace, and is based on the ideal model of nature that prevailed in European horticulture in the mid-1800s.

Comprising part of the Palace Park, the Queen’s Park dates all the way back to 1751 when it was created as a private garden in the Rococo style on the plot of land known as Sommerro. It was integrated into the Palace Park in 1840.

The Palace Park is a protected cultural monument and is managed by the Palace gardeners. The main part is open to the public all year, and the Queen’s Park is open from 18 May to 1 October.

We are very pleased that so many people visit the Palace Park. Everyone is welcome – all we ask is that you help us to care for our park.

The Palace Park, one of the Norwegian capital’s first and largest parks, surrounds the Royal Palace on all sides and features grassy areas as well as old, majestic trees.

The Palace Square is Norway’s main parade ground, and an important meeting place for the King and the people.

The Queen’s Park comprises a separate part of the Palace Park. It is closed during the winter months, but is open to the public from 18 May to 1 October.

Statues in the Palace Park

The Palace Park contains seven statues, the oldest being the equestrian statue of King Carl Johan from 1875. The Princess Ingrid Alexandra Sculpture Park is also part of the park.

The ponds in the Palace Park

The three ponds were key elements in Oso Palace Park when the park’s Romantic landscape was designed. Today the ponds serve as beautiful focal points within the park.