His Majesty The King’s Guard

His Majesty The King’s Guard is the military guard charged with ensuring the safety of the Royal Family in times of peace, crisis and war.

The Royal Norwegian Company of Marksmen was established on 1 November 1856 to enhance security around King Oscar I in Stockholm. The company was renamed His Majesty The King’s Guard in 1866, and was transferred to Kristiania (now Oslo) toward the end of the union between Sweden and Norway. Since 1888 the King’s Guard has been on duty at the Royal Palace and other Royal residences 24 hours a day, 365 days a year.

Today the King’s Guard has permanent sentry duty at the Royal Palace, Skaugum Estate, Bygdø Royal Farm when in use, Akershus Fortress and Huseby military camp. 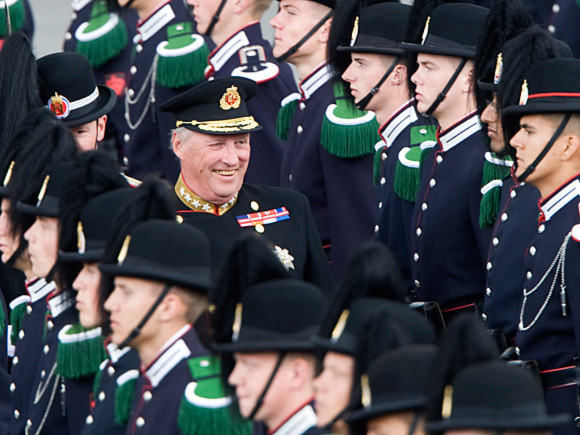 His Majesty King Harald inspects the Guard in their camp at Huseby. Photo: Scanpix.

Sentry duty at the Royal Palace and Akershus Fortress is performed in the characteristic ceremonial dress of the King’s Guard and focuses on ceremonial routines such as the changing of the guard.

Security operations are conducted in close cooperation with the national police.

Changing of the guard

The main changing of the guard detail takes place daily at 13.30. During the summer, concerts or drill exercises may be presented in conjunction with this ceremony. Please contact the nearest Norwegian tourist information office for more details. 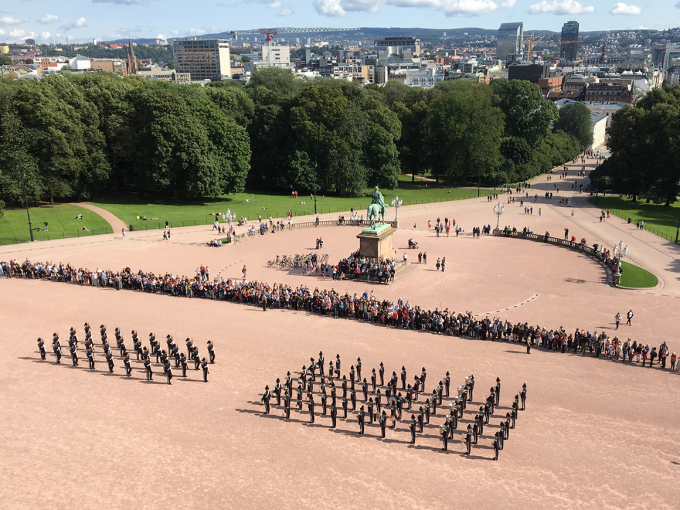 During the summer, concerts or drill exercises are sometimes presented in conjunction with the changing of the guard. Photo: Thomas Kristiansen, the Royal Court.

Parade of the King’s Guard

During the summer, members of the King’s Guard march through the streets of downtown Oslo. Led by a Norwegian military band, the parade begins at Akershus Fortress at 13.10 with mounted police at the head. The parade route extends from the fortress square, via Kirkegaten to Karl Johan Street and up to the Royal Palace. The parade arrives at the Palace Square at about 13.30 and then performs the changing of the guard ceremony.